At the end of 2008 / beginning of 2009 I was visiting Cali (Colombia) - La Capital De La Salsa Del Mundo! A hudge thanks to my friend and colleague DJ El Chino for the great hospitality and for the organization of my gigs. This is my travel report.

Looking at the 4 Million inhabitants, Cali is bigger than my home city Berlin! It lies near the equator, but not as high as for example Bogotá. For that reason a pleasant climate prevails all year (between 25 and 35 degree Celsius). Cali lies in a valley (Valle de Cali) - hence the saying: Cali es Cali y lo demas es loma, among others. 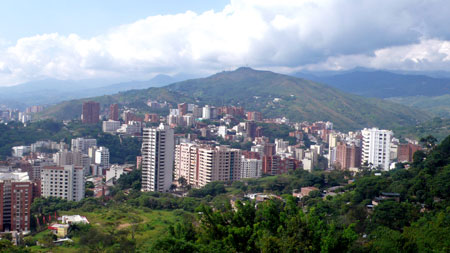 The northwestern part of Cali, seen from The mountain of the three crosses.

What is the Feria de Cali?

Every year between Christmas and New Year the biggest Salsafestival of the world takes place in Cali. Not only at a certain place but all over the city ( which remains in a permanent salsa-frenzy anyway) concerts are given in parks, stadia and theatres, collector of records meetings, processions, dance festivities take place as well as reunions of Salsa DJs and many many more. The town is brightly decorated - everythings is enlightened and pretty colourful.

Everybody who is anybody in the Salsa-Musicians-Scene is there. This time there were: Bobby Valentin (Bass at the Fania), Menique (singer of Tito Puente and Charlie Palmieri), Gran Combo, Andy Montanez, Oscar D´Leon, as well as Victor Manuel and Gilberto Santa Rosa, among others.

And of course all the Colombian Salsa-Bands were there, to start with La Misma Gente across Guayacan to Niche and Son De Cali. Johnny Sedes - a Fania Legend - noticed at his performance this year: Cali is today what New York used to be in the '70s... and I agree with him. I always used to take the Cali-Mania (Cali Es La Capital De La Salsa) for exaggerated. But who once was here knows: the cult is even understated. Cali really is the Capital of the Salsa and that is even when there is no Feria going on. There is always and everywhere Salsa in the city, in the supermarket, in the cab, in the bus, on the street ... truly everywhere. I never perceived such intensity before - not even in La Havanna and much less in New York (oh, sorry!).

But the best are the people in Cali. All highly friendly and receptive. And in the clubs people really know about Salsa and are also very interessted in new music - doesn´t matter wherefrom. The (according to my opinion) quite silly separation in two „camps“ - here the Cuban Music and there the“ real Salsa from the '70s“ - does not exist here.
Salsa is understood as a common culture. Everything is accepted, it just has to be good! 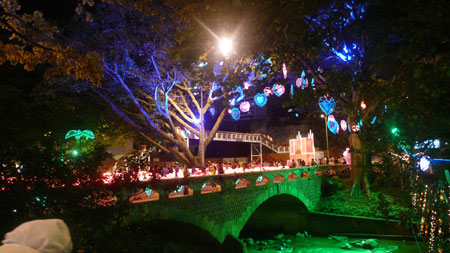 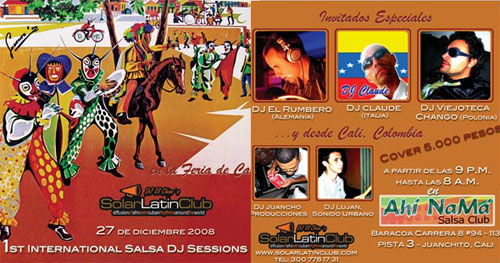 It got started at the very first evening. In the Salsateca "Ahi Na Ma" in the legendary Barrio Juanchito 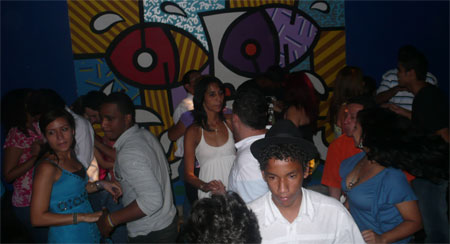 They dance quite modest, without many turnings, than there is little space... 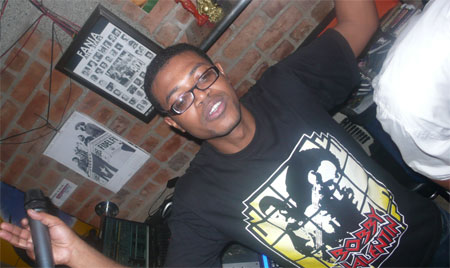 ... but the claims on the music are high. People sing all along and play on cow bells (Campanas), too. This picture shows the most current DJ for Salsa Dura in Cali: Juancho. 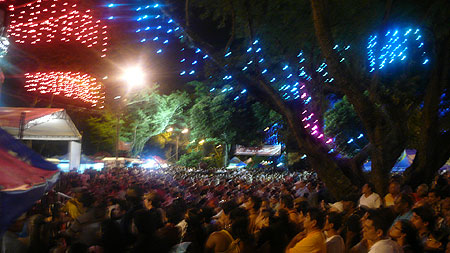 Listeners at El Parque De Los Melomanos Y Colecionistas. On "my" evening there were 3.000 person in the park. Listeners? Well, here come LP-collector and lunatics about Salsa from all over the land, to present each other their (of course) rare pieces of music. Most of them from LPs. At the end (after 24:00 hours) there is a band playing. People hardly dance - it´s more about the music. But lots of the music lovers bring instuments with them (Cow Bells, Maracas, Claves) and play with the music. The more Cow Bells you hear the better they like it. 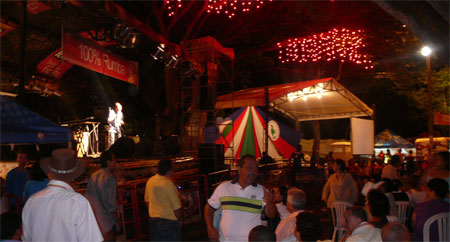 Everything is strictly regimented. You have to to sign up weeks before you can enter the stage. And also to specify the name of LP/ CD and Interpreter before. 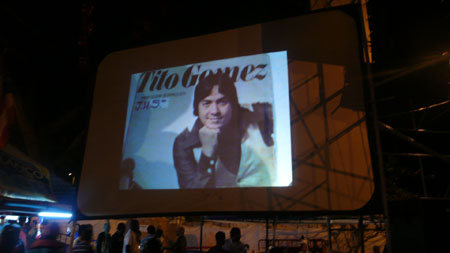 Allowed are only original copies. Then they project the cover on a screen, so everybody can see it. You can learn a lot about Salsa on such occasions and I listend to a number of tracks, I didn´t know before. 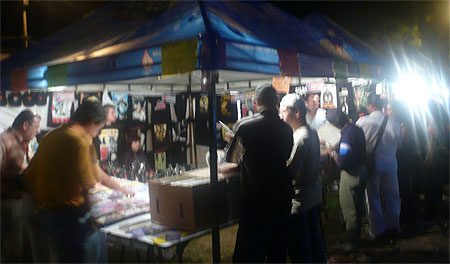 At the stalls around the park LPs, CDs and Salsa devotional objects are negotiated. For some rare pieces up to 700€ are layed on the table! 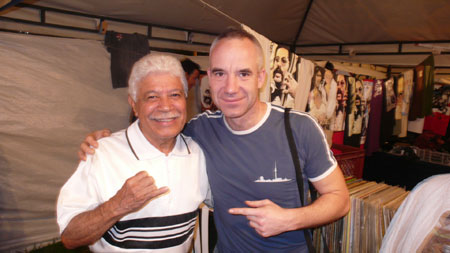 Also lots of musicians come to the park - it is a huge exchange of contacts. On this picture here: El Gran Menique (yes, the one who sang for many years with Tito Puente ans Charlie Palmieri) 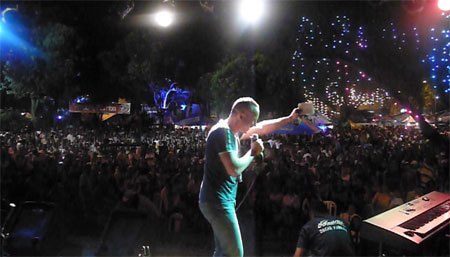 Well, and than it was my turn. It gave me the shivers to be standing before so many competent listeners. I presented Salsa from Europe. And recieved a lot of applause for that, because on this stage Europeans are very seldom seen and because nobody knew the pieces I played (there were a lot of questions about them). Unconsciously I
also started to dance a little and there was no more holding back. I raised a lot of cheer, a German, who is able to dance Salsa - this was a simply a sensation.

There is a Video of my appearance -->here 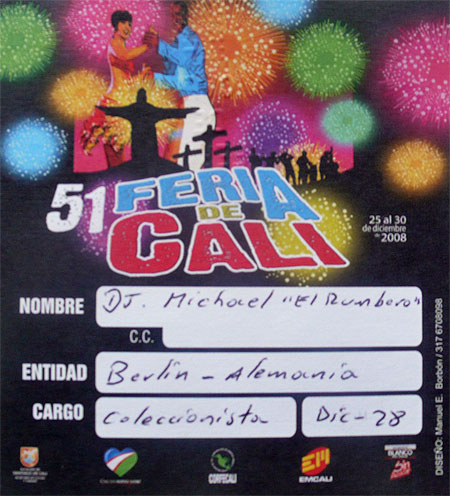 A collector's item - my Backstage-Badge of La Feria De Cali 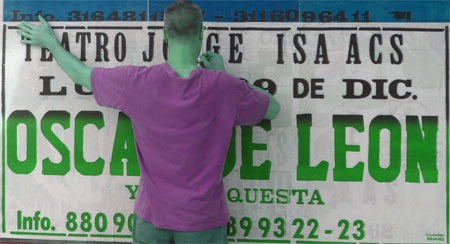 Of all things at the best concert of my life the battery of my camera had to finish...que lastima! So here the (very affectionately designed) tickets from the Teatro Jorge Isaacs. The Oscar´s concert was really the best I have ever seen. And I have already seen a lot. It is not only Oscar, the whole orchestra plays in a different cathegory as for example: Spanish Harlem, Los Van Van etc. The show is, in my opinion, the best one worldwide at this moment! 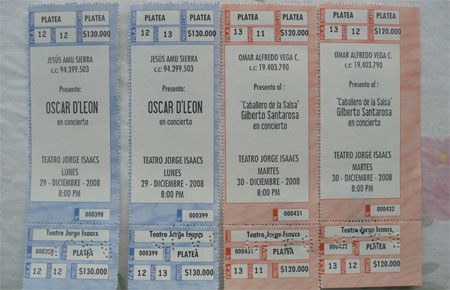 One more thing to say about the concerts at the Feria: there are also the Super-Conciertos at the hudge stadiums, where 5 or 6 well known orchestras play the same evening and up to 40.000 spectators come to see the show. I was advised against. Too big, too long latency times at the entry gates, too long pauses between the bands because of reconstruction, too short sets. Much better go see the soloconcerts, which are privat organized (in the theatres or at Chango). One can really savour them. It´s a stunning vibe - the audience sings along through the whole concert, knowing all songs by memory. 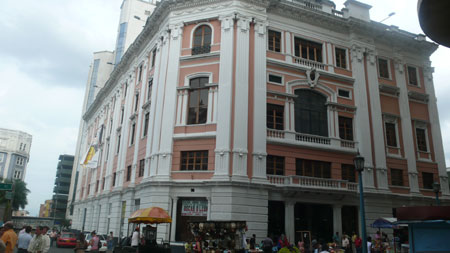 The teatre in the center of Cali. The next day also Gilberto Santa Rosa presented a concert here. After Oscar´s concert we hurried to the Parque to see the band of the night: Gerardo Rosales. And after that I has a terrific set in „Nabori“ - this was definitely the most exciting night, unfortunately without any pictures :-( 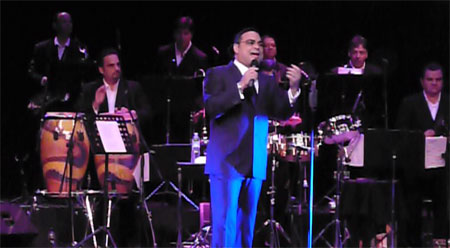 Again in the theatre, again a unique orchestra. And a cheerful Gilberto, who not only sings Salsa Romantica, but also songs from his times side by side with Willie Rosario and as a tribute to Colombia chooses the song „Año Viejo“.The hell breakes loose - everybody is singing along with him. 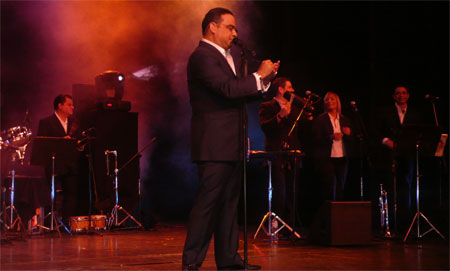 There is a Video of the song „Año Viejo“ -->here

And another video of the song „Monton De Estrellas“ -->here 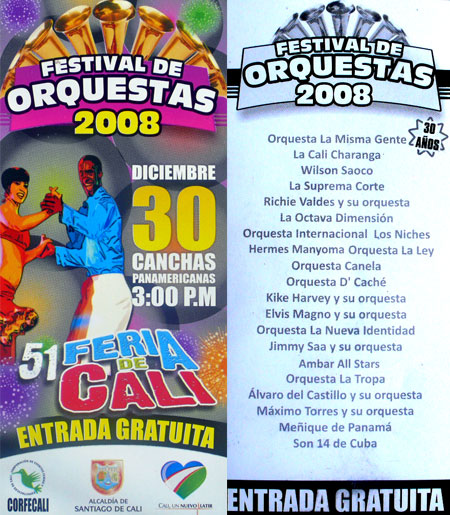 After a flying visit at the Festival de Orquestras we hurried to the Muralle De Bronce, where I finished the night with a DJ-Set. The DJ stands here right beside the barkeeper - amusing. 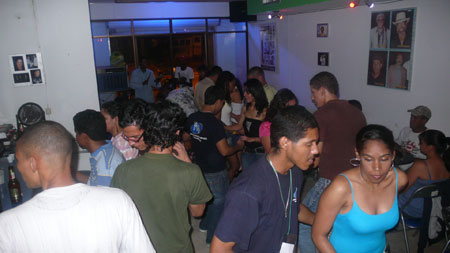 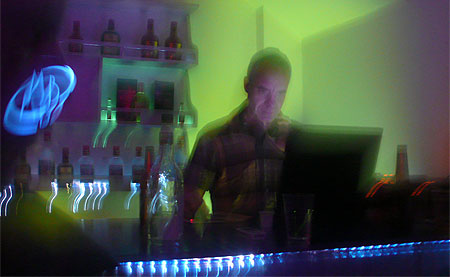 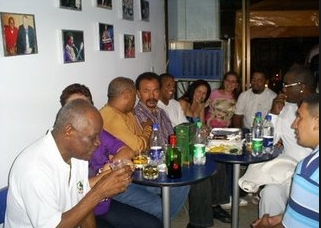 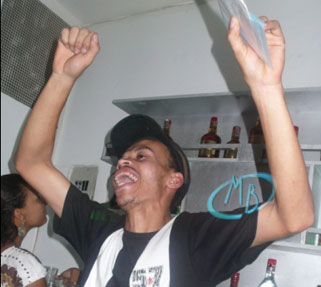 It continues -->here . among others with a visit at the Salsa-radio station.